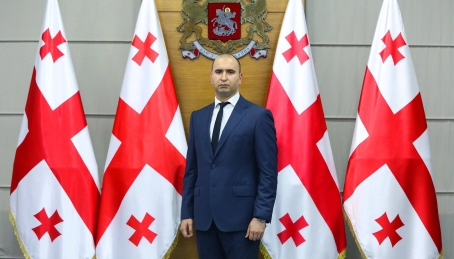 The Director of Information-Analytical Department of the Ministry of Internal Affairs, Kakhaber Kemoklidze has been appointed the Head of the National Security Council’s Office of Georgia.

Kakhaber Kemoklidze has held the above noted position since April, 2018 up to present.

In 2005 Kakhaber Kemoklidze graduated from Ivane Javakhishvili Tbilisi State University with honors and received Bachelor’s degree in Social Sciences majoring in economic and political geography. In 2007 he got a Master’s degree in Humanities.

Within 2010-2011 Kakhaber Kemoklidze received a full scholarship from the European Commission and continued his studies at Leiden University (Leiden, The Netherlands), where he obtained his Master's degree in European Studies.

In 2008, he completed his internship with the full US Government fellowship (Seattle, Washington) State, “EarthCorps”.

During 2005-2010 Kakhaber Kemoklidze worked in private and non-governmental sectors. He started his career in public sector in 2011 working as a senior analyst at the Information and Analysis Department of the Ministry of Internal Affairs of Georgia.

During 2015-2018 Kakhaber Kemoklidze continued his work at the State Security Service as the Deputy Head of Analysis and Coordination Main Division at Information and Analysis Department, and later was promoted as the Deputy Director of the Department.

From June 2012 to April 2018, he was a special representative of the Ministry of Internal Affairs and State Security Service to the Geneva International Discussions (GID) and the representative of the Central Government to the Incident Prevention and Response Mechanism (IPRM) meetings (Ergneti/Gali).

In 2016-2018 he was also the representative of Central Government during the meetings on “Trilateral Coordination Mechanism” of Missing People in the Occupied Tskhinvali Region.